When this era began, the industry’s public relations efforts remained focused on shifting consumers away from smaller mattresses and onto queen and king sizes, the so-called “supersizes,” but by the end of the period, the National Association of Bedding Manufacturers had created an entirely new structure for promoting industry messages and broadened its PR efforts far beyond matters of size.

Going into the movie business

The push to get consumers to buy bigger mattresses that began in the mid-1950s paid off. In 1967, supersizes accounted for 16.5% of all mattresses shipped and 24% of the industry’s dollar volume, according to a November 1970 article in Bedding magazine. “Measure Your Mattress Month,” introduced in 1962, was the centerpiece of the bigger-is-better campaign and continued to be the industry’s primary PR campaign throughout the decade.

In 1966, the industry began work on a film that would be used to spread its supersize-it message. Initially titled “Happy in Bed” before being changed to the more audience-appropriate “The Big Happy Bed,” the film was intended primarily for young women in home economics classes. The 20-minute movie, meant to be funny and educational, was funded by the NABM’s supplier members, who contributed the $25,000 for its production. The National Association of Bedding Manufacturers launched the Better Sleep Council in 1978 with the slogan, ‘Sleep Better, Live Better.’

It’s really worth retelling the plot, as described by Nate Sherman of Ther-A-Pedic Chicago, who helped introduce the movie to Chicago-area home economics teachers when it debuted in 1969.

“The film takes you to the 45th floor of an unfinished apartment building to introduce one of Manhattan’s most amazing families. Mother, father and their two sons live frenzied lives amid exposed beams, missing ceilings, and incomplete walls. Into this strange living pattern comes a young lady searching for truth. She soon finds herself involved in intrigue, terror, a poignant love affair, complete confusion and a hectic escape from the law aboard a rocket-powered crib. … Our adventurous young lady is making a survey of sleeping habits when she meets this bizarre family with their hammocks, mattresses floating on water and a rocket-powered crib,” Sherman said. “What looks like light, breezy comedy action was actually designed for home economics students to present facts about sleeping habits, box springs, mattresses, dual-purpose sit-sleep furniture and information on how to buy suitable bedding.” In just the first three months of its release to schools, more than 15,000 students watched the film. Tom Wright, first president of the BSC, signed his name on a banner that reflected the bedding industry’s support of the PR effort.

As often is the case with long-running campaigns, the power of NABM’s “Measure Your Mattress” message waned during the 1960s. In 1972, the industry refreshed the concept: “New Dimensions in Sleep” focused specifically on promoting queen-size beds as “the new double-size mattress for today-size people,” but it was less successful than its predecessor and was abandoned before completing its planned five-year run. Throughout the 1980s, the Better Sleep Council led a concerted industrywide public relations effort, including the sponsorship of consumer surveys that helped shape its media campaigns.

In 1977, NABM made a seismic shift in how the association would approach PR going forward, creating the Better Sleep Council to “boost bedding sales by dramatically increasing the consumer’s awareness of sleep,” according to a December 1977 Bedding magazine article announcing the concept. The idea was the brainchild of New York PR agency J.J. Lane Inc., which had originally shopped the notion to some bedding companies without finding any takers. But NABM, in need of a fresh message, was enthusiastic when the agency approached the association and made a three-year commitment to the idea. Again, suppliers ponied up the money—this time $20,000—to get things started.

“The Better Sleep Council is designed to become the consumer’s clearinghouse for information on sleep. Under the auspices of the Council, Lane will saturate 200-plus top U.S. markets with carefully researched and professionally written material focusing on facts about sleep, sleep problems, the importance of sleep,” the Bedding article continued. “The objective is to make consumer awareness of sleep as pervasive as the current concern with natural foods and exercise, and by doing that, to increase consumer awareness of the importance of proper bedding.” The BSC made its official debut at NABM’s 1978 convention with the slogan, “Sleep Better! Live Better!” In 1987, BSC spokeswoman Dianne Hales wrote “How to Sleep Like a Baby,” and Good Housekeeping magazine purchased exclusive rights to serialize the book.

Though a NABM effort, the BSC was founded as an independent nonprofit with an initial budget of $280,000 for three years. Mattress manufacturers and suppliers were asked to become BSC members, pledging financial support based on their industry volume in 1976. In its first five months of operation, the BSC estimated its messages reached some 79 million consumers via newspaper, magazine, radio and television, according to a November 1978 Bedding article.

Despite its initial success, the BSC struggled in the early 1980s, in large part because some in the bedding industry doubted the efficacy of focusing on the concept of healthy sleep rather than the mattress itself. In 1980, the organization severed its relationship with the Lane ad agency and hired a full-time staff person to direct PR efforts instead. Then, in 1982, unable to secure needed funding—about $600,000—from the industry’s largest companies to expand both staff and PR efforts further, the BSC board voted to cease operations (though the corporation established in 1978 continued to exist legally) and turn its existing funds over to NABM, which would oversee industry PR. 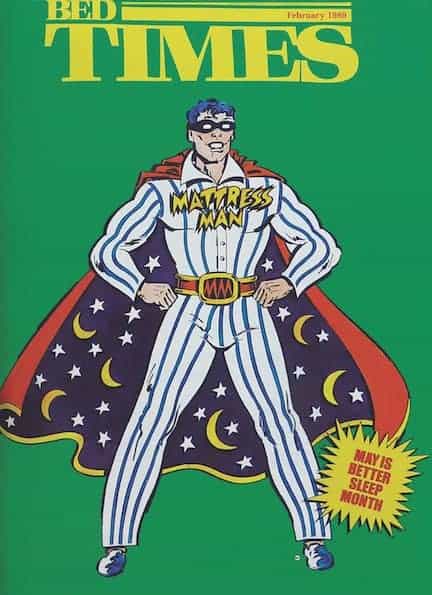 The BSC had fun and garnered attention with its 1988 mythical hero Mattress Man.

The BSC was down but not out. Still seeing the need for concerted industrywide PR efforts, in 1983, NABM took the council’s work under its own auspices as the Better Sleep Council Committee and hired the Henry J. Kaufman agency to direct the program. The new BSC focus: “Sell bedding—more bedding, better bedding, bigger bedding,” according to July 1983 Bedding article. “To reach that goal, consumer attitudes must be improved, the consciousness of bedding raised and the perception of the value of bedding heightened.”

The BSC started sponsoring consumer surveys that would inform its media campaigns and hired Dianne Hales, author of “The Complete Book of Sleep: How Your Nights Affect Your Days,” as a national spokeswoman, sending her out to tout BSC messages while touring the country.

In 1985, the BSC launched the first “May Is Better Sleep Month,” with four key messages for consumers:

✦  “For the best night’s sleep, always buy a set and always buy the best you can afford.”